My new historical drama has a brand spankin' new website which I created all by my self. Whew! Didn't think I could pull it off... I have posted some nice old Creole photos circa 1800's, video clips, and lots of other surprises will be coming your way! The Production Team includes David Brooks as Stage Manager and Set Designer. He was the SM of the last play I acted in "Julius Caesar Set In Africa". He is such a blessing.; Light Designer is Richard Abrams who has 45 years in the biz. He has been running things up at Yale Drama School for years. So grateful to have him. Angelina Scantlebury is Costume Designer who returned to NYC from working on films in LA. I really appreciate their enthusiasm and belief in this play. Yes I finally decided to take on a role AND direct... Stay tuned as I'll be adding the rest of the team down the road!

It was another wonderful experience as Wardrobe Supervisor to work with such talented professionals as the Forces of Nature Dance Theatre and the talented actors and singers! Just look at these amazing photos! Wishes Tut the best and hoping to see it go to the next level!
Posted by S.L. WILSON at 7:40 PM 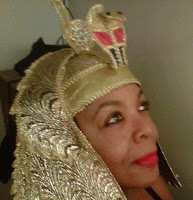 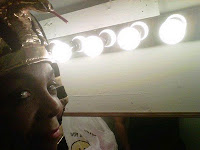 While the show is going on I'm hanging in the dressing room listening to the wonderful show and playing with costumes...
Posted by S.L. WILSON at 10:59 AM

A video clip from my latest Wardrobe Supervisor gig on New York Musical Theatre Festival's "Tut" as we are asked... The show is simply beautiful by the way!