READY TO LOCK DOWN DATES FOR BOTH PRODUCTIONS!

Stayed tuned... Hoping to have dates and venues secured for the production of "Blood Makes The Red River Flow" for February and "A Wound In Time" for April. Once that's done the wheels will be a turnin'!
Posted by S.L. WILSON at 6:28 PM 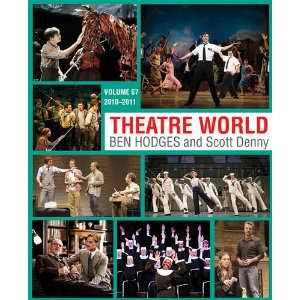 In this beautiful hard cover book is where you will find "A Wound In Time" listed as an Off Off Broadway Production along with cast and crew and their credit. You will find me credited as Playwright, Director, Producer, Sound Design, and Set Design.
Posted by S.L. WILSON at 6:18 PM

Labels: Drama, Off Off Broadway 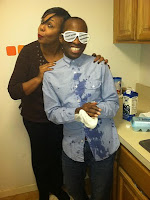 Moi and actor Roi King, who plays my son in the new web series "Group", posing after filming our scene. I appear in episodes 6 and 12. It was lots of fun participating in this production about folks in group therapy. Coming soon...
Posted by S.L. WILSON at 1:36 AM 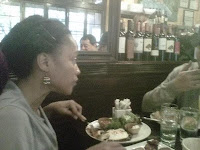 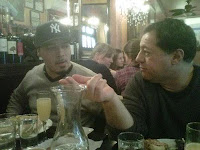 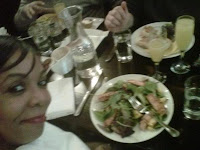 Spent a lovely Saturday afternoon at brunch with cast members Christiana Blain (Lizette Laviteaux), Ron Rivera (Ferdinand Juan-Carlos Montero), and Al Roffe (Henri Monet). We dined on Cuban food and Mimosas and shared our enthusiasm and hopes for the production. It was wonderful bonding time...

FOR MORE INFO ON THE PRODUCTION CLICK THE TITLE OF THIS POST
Posted by S.L. WILSON at 2:36 AM

QUITE A WEEK FOR MY PLAY "A WOUND IN TIME"! 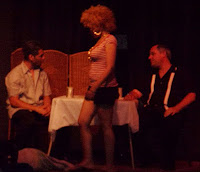 This week I was notified that my play "A Wound In Time" which I wrote, produced, and directed at Nuyorican Poets Cafe is now listed in Theatre World V.67. It is an archive of hundreds of Off Off Broadway productions and their credits made available nationwide to producers, industry people, students, and Library of Congress.

I also received a judge's comment who viewed my play for the 2010 NY Innovative Theatre Awards. Although we did not win these comments mean the world and further inspires me to bring AWIT to Off Broadway!

The following comments were left about your production of “A Wound In Time”.

Judge 1: This was a long show 2 hours and 20 minutes. It's hard to hold an audience that long, but they did. It was a wonderful evening in the theatre and I'm delighted I had the chance to see it. I was especially glad to see such well written and acted women on stage. The story was compelling, complex, funny and the characters rich.

You are free to use these comments however you would like. We do ask that if you post or print them that you credit them as “2011 IT Awards Judge”. Let me know if you have any questions.

Thanks again and have a great season,
Hillary

CLICK ON THE TITLE OF THIS POST TO LEARN MORE ABOUT THE NYIT AWARDS
Posted by S.L. WILSON at 1:28 AM 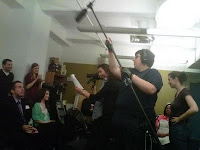 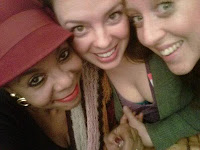 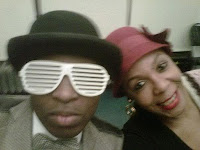 This past weekend I was on set of two upcoming Web Series... "Group" and "The Colors of Love". In "Group" I play Patrice who is the mother of character Anton. I will be appearing in episodes 6 and 12 in the role. It was lots of fun as you can see from the photos. The Flava Flav looking guy is my "son". LOL
Posted by S.L. WILSON at 12:45 AM