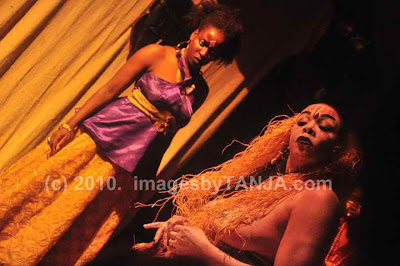 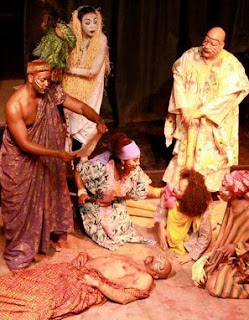 Being on stage again after over 20 years of focusing on writing and other projects has made me realize how much I love performing.   I LOVE the Classics!  When I told Rome Neal (Director and Theatre Director of Nuyorican Poets Cafe) that I wanted to audition for a role with very few lines in his adaptation "Julius Caesar Set In Africa" (since I was now middle aged and my memory wasn't what it used to be) he said I could try out for the role of the "Soothsayer" BUT that I had to perform topless.  The role was quite different being set in Africa for "Soothie" (as he and the cast referred to her) was a kin to a witch doctor.  I got the role but accepted it only because my boobies and entire body would be painted white.  That made the nudity more plausible to an old broad like myself.  It was a wonderful experience which was only topped when I  had no choice but to play dual roles in my Creole drama which had tons of lines.  I couldn't find anyone for the role so I had to memorize all those lines as well as direct.  Well... I consider that to be one of the major accomplishments of my life!  I always avoided going for major roles because of my distaste for memorization.  But I must say that I'm growing accustomed to it.