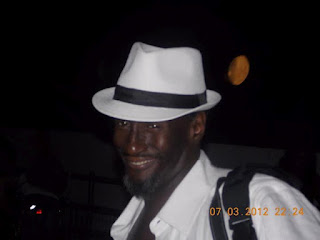 This sweet and gentle man who was responsible for documenting my historical Creole drama "Blood Makes The Red River Flow" with lovely photos and videography has passed over. William Richard Somerville loved his camera, and he loved to use it to help promote and support his friends.  He fought long and hard against the cancer that returned and finally decided he would fight no more.  He was so brave.  Thank you Rich.  It is because of you that I can prove to all the wonderful work of the actors and crew in bringing "the work" to life.  Your name and work will live in the theatre archives in the new volume of Theatre World.
Posted by S.L. WILSON at 6:58 AM

THANK YOU LEGENDS OF THE STAGE

Just browsing old photos of some of the stage legends and suddenly an ache came upon my soul. Knowing how they gave of themselves to suffer through pain, and then recover with joy for all to see... The wear and tear on their being... Such is the selflessness of the stage actor. I thank them for their sacrifice.
Posted by S.L. WILSON at 5:30 PM

Thanks to Fractured Atlas some of the pain of producing a play as an independent "artiste" was eased with the benefit of paying lower fees and special access under their non profit status. So grateful.

I will continue to try to make a difference through the arts until my last breath with their help.  TO HELP JUST CLICK

Its hip, mystical, chilling and funny... It stares in the face of ever present social issues like classism, racism, homophobia, bullying, colorism, sexism, religious persecution, low self-esteem, self hatred, and then some... All in one intense drama! "A Wound In Time".

SIMMERING TO A BOIL! 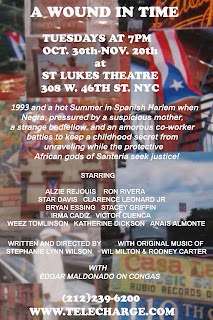 Rehearsals are going very well.  The cast of the new "A Wound In Time" is not only truly talented, but more importantly, a cast of professionals!  This is gonna be good!
Posted by S.L. WILSON at 3:03 PM

CAST OF "A WOUND IN TIME" GUESTING ON AC LOWE SHOW OCT 15TH!


The cast of "A Wound In Time" and I have been invited as guests on the AC Lowe Show on Centanni Broadcasting.  I'll be co-hosting and interviewing my fellow thespians live from Umbertos Clam House in Little Italy on Monday, Oct. 15th at 6pm ET.  Listen live or after on demand at Centanni Broadcasting.com

Pressured by a suspicious mother, a strange bedfellow, and an amorous co-worker Negra Centron battles to keep a childhood secret from unraveling while the protective gods of Santeria seek justice in Spanish Harlem.

A hot summer in 1993 finally reveals the secret past of Cuban-American Negra Centron.  Magic, ritual, and destiny are the threads unraveling this gripping mystery thriller which tackles social issues in the true sense of "theatre".

COMING THIS FALL OFF BROADWAY!
TICKETS
Posted by S.L. WILSON at 12:10 AM